Christian Super CEO Ross Piper vowed his career would combine vocation and purpose, and already he's led several organisations in challenging and remote corners of the world. Now in talks to merge Christian Super, he is drawing on his faith-based leadership to successfully balance member values and experience with best interest expectations. By Ben Power.

During university Ross Piper spent a lot of time at indigenous work camps in the Top End and western desert, including 18 months living on the tropical and remote Groote Eylandt in Arnhem land.

And for Piper it was a similarly formative experience. “I think for an Australian to simply spend time in one of these remote communities is confronting but equally inspiring,” he says. You are confronted with a reality that is deeply challenging. It stays with you. It changes your world view.”

Piper vowed that his career would combine vocation and purpose.

As CEO of the $2 billion ethical super fund, Christian Super, he has found the perfect outlet.

However, he now faces a major challenge after regulator the Australian Prudential Regulation Authority (APRA) forced Christian Super to find a merger partner. The fund is now in talks to transfer members into fellow ethical investment pioneer Australian Ethical and Piper is committed to working hard to deliver a good outcome for Christian Super members.

“Australian Ethical is one of the few pure play values-based investment managers in Australia and the outcomes of their investment approach are well aligned to ours. For Christian Super, the opportunity and prospect of creating a larger fund with like-minded members who want to use investing and ethical stewardship to invest for a better world, is very attractive to us.”

“Australian Ethical is one of the few pure play values-based investment managers in Australia and the outcomes of their investment approach are well aligned to ours. For Christian Super, the opportunity and prospect of creating a larger fund with like-minded members who want to use investing and ethical stewardship to invest for a better world, is very attractive to us.”

Piper was born and bred in Sydney, one of four children. His father worked in technical education and helped indigenous students enter the technical education sector. His parents instilled hard work and an attitude of doing the right thing by others. “The way they treated others with fairness and with respect, it gave me a great ground and informed a world view that has always challenged me to aspire to live in that way.”

After his outback uni experience, Piper realised he wanted a career outdoors and he studied geology and geophysics at Macquarie University. He joined the mining industry, working for Rio Tinto in the Pilbara not long after the Mabo decision, which drove a number of changes in the way companies had to operate. He then moved into aid and development, working with World Vision in the former Yugoslavia.

In 2004, in a surprise move, he joined Macquarie Bank as Head of Corporate Risk, where he led non-financial risk management for the bank. “Macquarie was going through a significant expansion in emerging markets and I led a global team tasked with supporting the business in navigating sovereign, political and other operational risks in these contexts.”

In 2010 Piper turned 40. He had four kids and was living a comfortable life on the northern beaches of Sydney. “There was a growing sense of wanting to return to a place where there was a stronger purpose in what I did.”

He left Macquarie and rejoined World Vision International as Strategic Director of Operations in the Middle East and Eastern Europe. In the role he led 2,500 staff across 13 countries in complex and fragile countries, including Afghanistan, Pakistan and Syria. “It was always with a common theme – how do you implement good relief and development projects and deploy capital in a way that promotes long-term change.

“For myself and my kids, this time we spent over there gave us a real perspective on the relative privilege we have here in Australia. I guess as a parent you hope that your kids will somehow grow up with a sense of appreciation and perspective on that.”

With the children heading into secondary schooling, the family returned in 2015. Piper spent another 18 months working with World Vision Australia in an operations role.

But he had always been intrigued by the opportunity to leverage institutional capital to solve some of the world’s most pressing societal and environmental problems. “Philanthropic giving is critically important, but frankly, it is very small compared to the potential for institutional capital to be deployed. And so the whole idea of impact investing, ethical investing, was intriguing to me.”

“Philanthropic giving is critically important, but frankly, it is very small compared to the potential for institutional capital to be deployed. And so the whole idea of impact investing, ethical investing, was intriguing to me.”

When the role of CEO of Christian Super arrived four years ago, he jumped at the chance to lead a pioneer in ethical and responsible investing. The fund invests ethically based on Christian values.

Piper describes himself as Christian. “My faith has always been important to me. It’s deeply personal, but it does inform all aspects of how I understand the world, who I am, and how I lead and aim to treat others. I guess it’s a bit like a compass for me.”

Faith-based leadership, he says, is about service and humility, and the right blend of conviction and vision balanced with empathy and kindness. “It’s about empowering others to deliver on an organisation’s mission and purpose. Faith-based leadership is about creating an environment where staff can take intelligent risks and not be critical of failures in a way that stifles innovation.”

“It’s about empowering others to deliver on an organisation’s mission and purpose. Faith-based leadership is about creating an environment where staff can take intelligent risks and not be critical of failures in a way that stifles innovation.”

When Piper joined the fund, it had $1.4 billion under management. The mission was to grow the fund and he has succeeded in raising that to $2.1 billion. 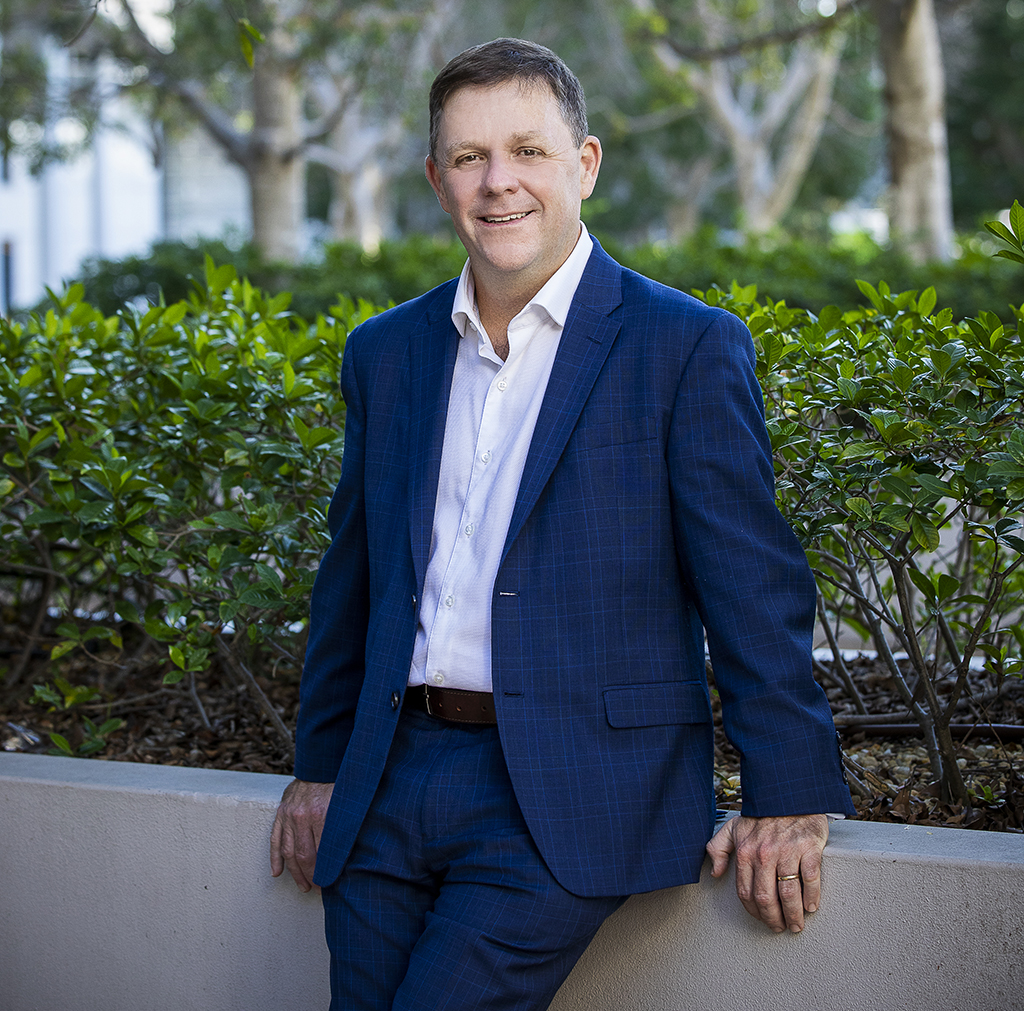 Christian Super is also a leader in impact investing and was named the Global Impact Asset Owner of the Year in 2017, and the Australian Impact Investment Owner of the Year in 2021. The fund has around $150 million in impact investments that aim to deliver a positive social or environmental impact. Impact investments include Casa Capace, which aims to build 1,500 specialist disability homes for NDIS participants over the next few years.

But in August 2021, Christian Super was named by APRA as one of the 13 super funds that failed the performance test, which formed part of the Your Future, Your Super (YFYS) reforms.

Then in December last year, after a review into its investment oversight, governance and strategic decision making, APRA imposed additional license conditions on Christian Super. They were aimed at rectifying Christian Super’s “persistent investment underperformance”.

APRA required Christian Super to implement a strategy to merge with a larger, better-performing fund.

Piper says there has been a “rough justice” element in the application of the performance test and the imposition of licence conditions.

He says Christian Super has always delivered consistently against its investment targets, which have historically been more conservative because of member demographics and related risk sentiment factors.

Because the performance test is retrospective, he says, it has failed to account for a recent performance turnaround after Christian Super made significant changes to its investment strategy and asset allocation two to three years ago. Core changes included an increase in allocation to growth assets, coupled with actions to address areas of underperformance in the manager lineup.

“In fact, in the 2021 calendar year, the fund’s MySuper product was one of the top three performing growth funds in Australia,” he says. “So there has been a degree of internal frustration. It takes time for those things [changes to investment strategy] to work through in terms of your investment performance, particularly when the performance test is retrospective over an eight-year period.”

Piper notes that through its time of “underperformance” the fund has continued to grow strongly and also delivered consistent fee reductions. “This is not a fund that has been poorly run. We’ve listened closely to what our members have been telling us. We do think the fund has been sometimes unfairly misrepresented in the media narrative around Your Future, Your Super.”

“This is not a fund that has been poorly run. We’ve listened closely to what our members have been telling us. We do think the fund has been sometimes unfairly misrepresented in the media narrative around Your Future, Your Super.”

Christian Super had also been seeking a merger partner for the past 12 months, before APRA’s new conditions. Piper says he recognises that consolidation can be beneficial, “But there is good consolidation and bad consolidation.”

Piper argues that scale is important but in and of itself “is not a direct predictor of strong member outcomes”. While efficient organisations and competitive fee structures are important, equally as important are highly engaged members. “We think there is a correlation between member engagement and financial outcomes,” he says. “A highly engaged member will, in our view, make better choices in terms of investments and products.”

Christian Super is early in the due diligence process with Australian Ethical, but the benefits of the tie up are obvious. Both funds are pioneers in ethical investing, have highly engaged members, and members of the combined group will benefit from scale.

But what will happen to the Christian overlay?

Piper says there is a respectful understanding of differences between the funds but a deep conviction around what is common. “There’s a number of important questions and issues that we will work through as part of due diligence. What we can say with confidence, though, is that there is very strong alignment with core elements of the way we invest and the way that Australian Ethical invests.

Ultimately, Piper says, ethical investing and faith-based investing are highly compatible. “Like Christian Super, Australian Ethical is deeply committed to investing in sectors that create better outcomes for people, and a more sustainable planet, and also avoidance of investing in sectors, industries or companies that are damaging to people or the planet. Impact investing is another area of deep alignment.”

As the merger progresses, Christian Super isn’t resting on its laurels. Piper says it is focused on “relentless improvement” across investment strategy, operational efficiencies and member experience.

To manage stress Piper gets outdoors and loves running, cycling and ocean swimming. His four children and his wife, who also has a demanding job, help keep things in perspective. “When you walk in the door at night, the richness and complexity of kids and the extraordinary privilege of parenting creates a very natural balance for what is happening professionally.”

Christian Super’s merger plans may have been accelerated by APRA, but its journey takes place within the context of wider consolidation and towards a small number of mega funds. Many, including Piper, are concerned that something is being lost in the merger frenzy if absolute consolidation results in reduced competition and choice for Australians who care deeply about how their retirement savings are invested.

“We have an industry increasingly characterised by scale, but hopefully that will be balanced by funds that have a very clear, distinctive, and if you like niche, highly engaged membership,” he says. “I think for the future health of our sector it is very important that you have both elements.”