Cbus CEO Justin Arter is on a pathway to grow the giant industry fund to at least $150 billion of funds under management. He shares how he plans to achieve this, and to ensure Cbus is one of the top six or eight funds he expects to dominate in the next five years. In the meantime he hopes policy makers will stop tinkering with the super system, such as with Your Future, Your Super and stapling, and creating unintended consequences. By BEN POWER.

Justin Arter, CEO of industry fund giant Cbus Super, gardens. At his Melbourne home, he has cultivated a passion for plants local to the region and created a magnificent sustainable, indigenous garden.

Arter gardens to relax, but also because he learns an important skill. “I’m not by nature patient,” he says. “I love gardening because it teaches you patience. No matter what you do, you cannot make that plant or garden grow more quickly than it is going to.”

Arter, who began the CEO role in July 2020, has a clear goal: to grow Cbus to at least $150 billion of funds under management, which will give it the scale to compete with the giants of super, the likes of AustralianSuper, Sunsuper-QSuper, Aware Super and UniSuper. “The quest for growth is an unending one if you are a large industry fund, and we are on that quest,” Arter says. “We think $150 billion is the minimum viable.”

“The quest for growth is an unending one if you are a large industry fund, and we are on that quest.”

But that quest to grow could test his patience.

To reach his goal, Arter will need to find willing merger partners at a time when his rivals are also seeking tie-ups with suitable smaller funds. Like his plants, it could take time. But he is counting on having an edge with smaller funds that, like Cbus, also cater to blue-collar workers. “Philosophically those groups should feel more aligned with Cbus than they might with other groups,” Arter says.

And Arter also believes another group needs to learn patience: policy makers. They need to stop tinkering with the super system, he argues, which in cases such as Your future, Your Super (YFYS) and stapling, is creating unintended consequences.

Planting the seeds for an investment career

Arter grew up in Victoria’s Mornington Peninsula, south of Melbourne. It was then a semi-rural area where his parents, also keen gardeners, were teachers. “A trip to the city when I was a 12 or 13-year-old boy was quite a big deal in those days,” he says.

After school he moved to the city, studying law and commerce at Melbourne University, but found legal work boring after he graduated.

At 23 he got a job as a trainee equities analyst at stockbrokers, Paul E. Morgan and Co. “Once you train as an investor it never leaves,” Arter says. “So you’ll always find me at Cbus or anywhere actually, very interested in what’s going on in equity markets.”

He moved through various firms before landing at blue blood broker, JBWere. He stayed for 19 years working roles across strategy, trading, corporate finance and management, becoming managing director of what was then Goldman Sachs JBWere following the 2003 merger of the two firms. “It was a great place to work, a fantastic place with a really strong culture and strong ethics.”

The merger between Goldman Sachs and JB Were in 2003 taught Arter that combining firms can create significant value, but he adds that mergers—even when they appear a perfect match on paper—can be a challenge to implement. 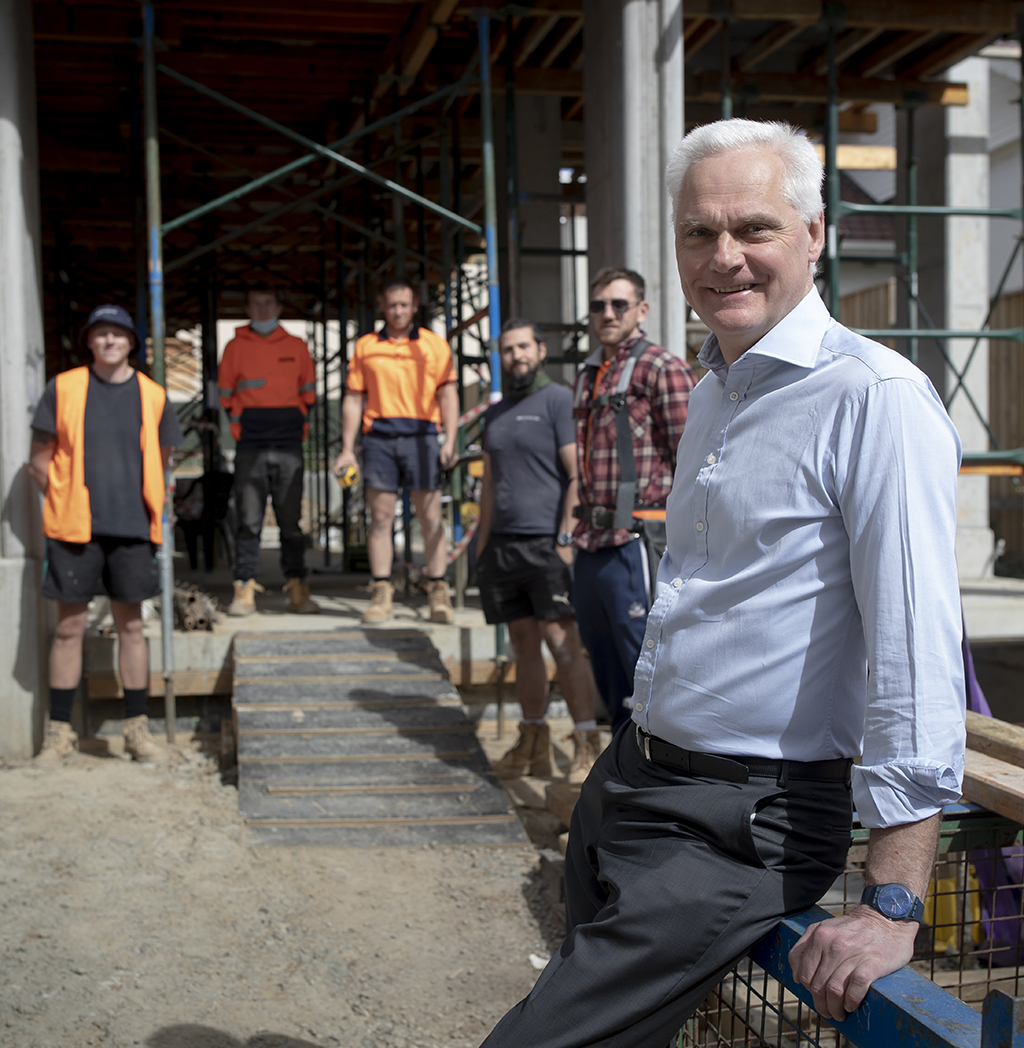 In 2009, Arter became the CEO of Victorian Funds Management Corporation (VMFC), which invests money for Victoria’s public authorities, including its defined benefits assets. The fund had experienced a period of poor performance. “It was quite challenged when I got there, there’s no secret to that,” Arter says.

Arter improved performance, but his time at VFMC particularly taught him stakeholder management. He learnt to communicate “with all sides and with complete transparency” and to understand the other person’s point of view, which helped him build a strong relationship and trust with the Victorian Department of Treasury and Finance.

In 2012 a friend from Wharton (Arter had completed the Advanced Management Program at the famous Pennsylvania business school), who had become chairman of BlackRock in Hong Kong, called looking for a country head in Australia. Arter was keen to have some more commercial sector experience again. With BlackRock he moved from Melbourne to Sydney, then eventually to London, which gave him insight into how an old-style pension system works.

But his time at BlackRock, the world’s biggest fund manager with $US9.5 trillion of assets under management, taught him something even more important: the power of scale. “Scale and size confer unambiguous advantages to you as a fund in the sense of buying power,” he says. “You can transfer that buying power back to members in terms of cheaper fees and increased returns. It is quite a nice, virtuous circle.”

“Scale and size confer unambiguous advantages to you as a fund in the sense of buying power. You can transfer that buying power back to members in terms of cheaper fees and increased returns. It is quite a nice, virtuous circle.”

Embracing the opportunity at Cbus

When Arter returned from London to Australia he got the rare chance to build scale. He was approached to become the CEO at Cbus, the super fund for the building, construction, and allied industries.

Arter had been eyeing off the Australian super system for years. “It is the subject of uniform admiration overseas by people,” he says. “The opportunity to take a CEO role at one of the largest super funds was pretty attractive.”

Arter wanted his professional life to be more purpose driven than money driven. He looks out the window to a construction site next door. Some members are pouring concrete. “If I can use my talents, however tiny they are, to try and provide better financial retirements for our members, then that’s actually a good thing.”

Cbus is a large direct investor, including its property arm which has invested $3.3 billion in building projects across Australia. Along with the likes of AustralianSuper and UniSuper, Cbus has been moving its investments in-house. Some 35 per cent of Cbus’s investments are now in-house. Arter says that has saved hundreds of millions of dollars of fees, and Arter says internalising investments will continue, particularly in areas where the fund can attract talent.

Direct investing and bringing investments in-house have paid off. Cbus Growth has been one of the top performing growth funds over ten years, returning 9.55 per cent on average each year.

But the overwhelming quest for Cbus is to get bigger.

The strategy to achieve growth

Arter says financial commentators are right. Six to eight funds will dominate in the next five years. “We are most anxious to be one of those eight,” he says.

Cbus has already announced a merger with MediaSuper, which manages $6 billion of funds for the printing, arts, media and entertainment industries.

Arter says many smaller funds are struggling to execute on investment performance, fees and service. “All of those groups are attractive to us.”

Arter is confident of Cbus’s value proposition, including superior investment performance. “It’s not a coincidence that the top performing funds are usually the largest.”

“It’s not a coincidence that the top performing funds are usually the largest.”

But, despite the MediaSuper merger, Cbus is naturally attracted to funds in ‘blue’ and ‘light-blue’ collar funds aligned with construction and building. “It could be mining, it could be steel manufacturing, it could be warehousing, it could be transportation. It’s not necessarily outdoor work in high-vis and hard hats, but it’s often manual or semi-manual labour.”

When it comes to the broader industry and policy debate, Arter says all stakeholders—such as industry funds themselves, government, regulators—should recognise super is the primary source of fundamental long-term capital in Australia’s economy.

But the industry is subject to “short-term arguments about piece of legislation or policy”. “They are, in most cases, missing the point, which is that we have a system that’s the envy of the world,” he says. “You should harness this, particularly rebuilding Australia back from COVID-19, or back from anything else. This should be the fundamental source of capital, not the subject of political debate.”

Arter believes policy stability is paramount after “extraordinary” amounts of legislative changes in the past three decades. “Hardly a year goes by without something being adjusted,” he says. “Your future, Your Super (YFYS) is the latest in a long list. I’m quite sure it won’t be the last.

Cbus supported the Government’s agenda of removing underperforming funds and duplication of accounts. But the fund has questioned how that has been implemented. “It was not as good as it could have been,” Arter says.

Stapling, for example, is not a bad concept because it eliminates duplication of super accounts, Arter says, but it’s got to be fit for purpose. He notes that many people may be stapled to the first fund of their choice. But if they move to another job, particularly in hazardous occupations, they may not have the insurance that they need.

“Before you just wave it off and say, Oh, well, it kind of doesn’t matter’, it really does, because the only way some of the workers in hazardous occupations, like ours, can obtain the insurance they need is to be with a large industry fund. You can’t buy that insurance elsewhere.”

A young person may be stapled to a fund generating very good returns, but that doesn’t offer default insurance. “So heaven forbid you move into our sector and you have an accident, you’re not covered for insurance. The only way to get that is to be with us. So, that’s why we sought an exemption in the legislation, in much the same way as we saw sought back in 2019, where the Government gave us such an exemption.”

Cbus didn’t secure that exemption. “When I say that implementation was not as good as it could have been, that’s specifically what I mean.”

So, when will Arter know when his job at Cbus is done?

“When we are on that trajectory to be one of the very largest funds who continues to grow and serves their members as best they can,” he says. “We’re well on that way. But we are merely in consolidation phase now. We won’t know the outcome of that for another four or five years.”

For Arter, that could require patience.