Damian Graham grew up on the outskirts of the Mildura in northwest Victoria. The Chief Investment Officer of the $100 billion industry fund giant First State Super (FSS) says his rural background has helped him develop the equanimity and perspective needed to invest.

“When you’re suffering the slings and arrows of investment markets it’s important to take a balanced approach and not be too volatile in your thinking,” he says. “I think my country background helps me with that.”

But despite his boy-from-the-bush origins, Graham is now at the apex of one of the emerging mega funds that will control vast pools of capital and dominate, not just the super industry, but also corporate Australia.

There is a growing spotlight on how these mega funds will manage and deploy that power.

Graham says to meet the challenge of soaring scale, First State will lend more to corporate Australia, focus on sustainable returns, and manage liquidity. But, above all, the fund will be a responsible investor and use its investments to create a positive impact on the community. “We are making sure we are driving better outcomes from the portfolio for members, but also driving better outcomes from a community perspective,” he says.

Investing in learning, and industry experience

Graham had some false starts in his journey towards his investing career. As a child in Mildura, he loved facts and figures. “I was always a kid very interested in maths and numbers and statistics. That was always my great interest as a child.”

Graham decided to study engineering at university in Melbourne, but soon realised he didn’t have an affinity for the field. He took a year off and worked at one of ANZ’s early investment management businesses.

He found markets incredibly intellectually challenging. “It really sparked my interest in investing. I loved the seeking of knowledge; continually trying to learn and understand things.”

Graham then decided to gain more suitable qualifications and began an Economics degree at La Trobe University which he completed with Honours.

He then took a number of investment jobs, starting with Norwich Investment Management, then spent a year travelling the world before joining JP Morgan (later Citigroup).

In 2001, Macquarie Bank asked him to join its start-up managed account businesses, Macquarie Private Portfolio Management, as Head of Investments, where he stayed for more than a decade.

Graham says he doesn’t actively seek new roles but focuses on doing a good job. “I believe that learning and being patient will pay off over time.”

In 2007, on the eve of the global financial crisis (GFC), he became head of the Private Portfolio business. Graham says it was a formative experience in developing his investment philosophy.

“It was instrumental in helping me learn,” he says. “It underlined that communication and accountability are critical.”

But, more importantly, he learnt to not be overconfident when making predictions about the future, because multiple scenarios could occur. “It’s about being humble and not thinking you know more than you do because the future is an uncertain bunch of outcomes. The GFC was a great teacher of that for a lot of people.”

Graham says he is always interested when he now meets with someone who seems certain about predicting future outcomes. But he says the industry generally has become better at “being humble”. 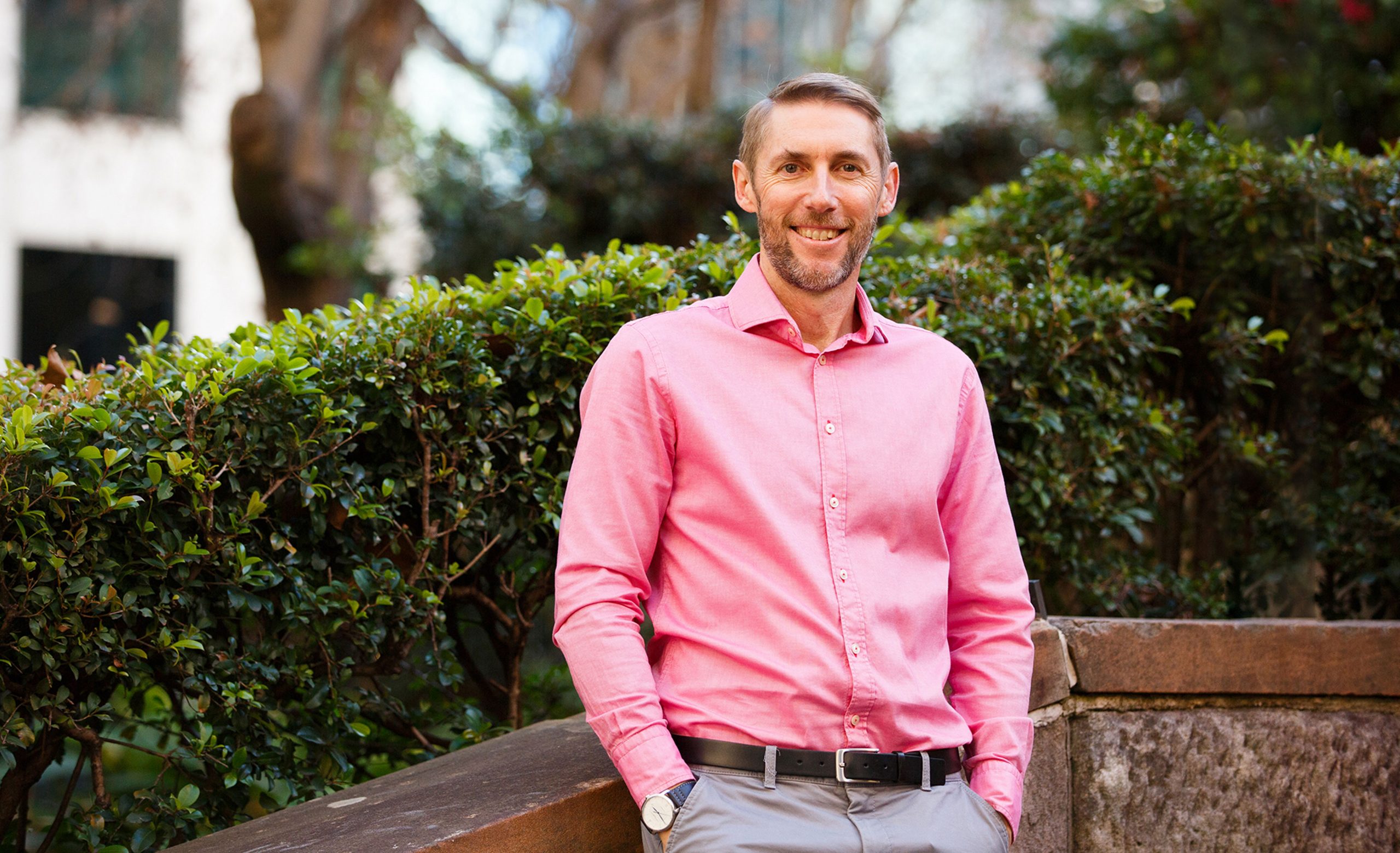 In early 2012, State Plus (then State Super Financial Services) approached him to join them as Chief Investment Officer. “I liked the dynamic of it and felt it was a business very close to end clients, the members.” It also gave him an opportunity to manage larger sums and a broader array of investments.

Graham says many people ask him about shifting from Macquarie to the not-for-profit super sector. He says that he always felt Macquarie was a well-managed, risk-focused business “It was entrepreneurial to a degree,” he says. “But State Plus was also entrepreneurial and well managed and allowed you to do things where there was a rationale.”

First State bought State Plus in 2016, and Graham was elevated to CIO, implementing the investment strategy and team of investment specialists for both.

First State has 803,000 clients and members across heath care, police and emergency services, and the public service.

Graham says the fund has a particularly strong focus on its members.

“That’s definitely more elevated here than in any other organisation I have worked for,” he says. “That’s an absolutely genuine focus here. It is easy to have this focus when your members are the nurses, teachers and emergency workers in our community.”

Graham’s investment team has 80 people, including 25 to 30 portfolio managers and a number of analysts. He says he is focused on building a strong team that helps people develop their careers.

Like other funds, First State has been insourcing investment capability. The fund has internal capabilities across most of their asset classes. It invests directly in quantitative Australian and global equities; lends directly in the credit space; and owns some infrastructure and property directly. But most of its money remains externally managed.

Graham says the fund is committed to the hybrid model of both internal and external management of assets. “We will continue the hybrid model,” he says. “We don’t think we can do everything. We think members can benefit from those external relationships.”

Graham says the fund has a clear investment philosophy: to drive a better outcome for members but to generate a more positive impact on society.

Graham says the fund has a clear investment philosophy: to drive a better outcome for members but to generate a more positive impact on society.

The fund, he says, is particularly focused on retirement. It comes amid the Federal Government’s review of Australia’s retirement income system, which is shining a spotlight on the issue. Graham says FSS has a very significant proportion of its members in or approaching retirement, with more than $25 billion in pension assets. He says that allows FSS to invest differently for retirees, particularly when it comes to managing the risks of market volatility for retirees.

Another is education and advice. Graham says members will get better long-term outcomes if they have access to high-quality guidance, education, support and advice. He notes that First State owns and operates the largest profit for member advice offering through State Plus. The fund is also building out its digital advice framework.

But one of the biggest issues Graham is grappling with is increasing scale. “We are likely to be a lot larger in the next five years,” he says. “Sustainability is really critical. How do we continue to generate good long-term returns in a competitive market with that growth?”

First State is currently merging with VicSuper, which will create a behemoth with $130 billion of funds under management, and Graham says further mergers can’t be ruled out. “It would be hard to suggest there won’t be more mergers over time, whether us or others.”

It would be hard to suggest there won’t be more mergers over time, whether us or others.

The combined fund will be one of the nine mega funds that Rice Warner, in its Superannuation Market Projections 2019 report, says will dominate the industry in coming decades. Rice Warner estimates First State and VicSuper will have $175 billion of funds by 2024.

Graham says the super industry is going to be a much larger provider of capital to support the economy in Australia. “How do we invest and build capabilities to support that?”

“That dynamic is going to continue as super becomes a larger and larger proportion of the capital available and starts to become multiples of the size of the Australian economy,” he adds.

Graham says that massive scale and the important role of capital provider to the economy will create several issues.

Funds, firstly, need to increasingly think about how to provide direct lending. In the past two years First State itself has been lending alongside banks. “That’s been a positive process where we’ve been providing direct loans to corporates,” he says. “That’s been a strongly positive activity for us; it brings us closer to the market; it’s a lower fee activity so there are scale benefits to it for members.”

And scale also means big social responsibility. Graham says that perhaps the biggest focus of the fund is responsible ownership: deploying the funds capital to benefit, not just its members but the broader community.

The fund is currently focused on its role in supporting the economy to transition to a lower carbon position. That includes advocating for change that the listed companies the fund invests in, as well as external providers. First State is also investing in the renewables sector. It has invested in renewable energy projects throughout the world, including investments in North America, South America, Europe, and Asia Pacific. And it recently made its first direct investment in a renewable energy project in Australia, buying a one-third stake in the Snowtown 2 Wind Farm in South Australia, one of Australia’s largest operational wind farms.

Graham says the fund is also making an impact in another vital social issue: affordable housing for ‘key workers’. The surge in house prices has priced out workers in important service industries such as nursing, teaching and police/emergency services from many areas.

First State has been taking advantage of the oversupply of apartments in Sydney and Melbourne to buy residential stock at a discount, then turn it into affordable housing for key workers. The fund has bought sites in the Sydney suburbs of Miranda, Epping, Waterloo and Hurstville, and Moonee Ponds in Victoria. Together they will make 234 units available to key workers with a 20 per cent discount.

Closer to home, and staying focused

Amidst these complex challenges, Graham manages to be a keen golfer and tennis player. He says it’s important for executives not to get too caught up in work and forget what really matters.

“We need to challenge ourselves a little bit to ensure we’re keeping things fresh and not make it all about work,” he says. “I try to ensure I do some things that push me outside my comfort zone.”

Twelve months ago, Graham agreed that he would leave work early on Monday and cook dinner. “No one is rejoicing about the cooking; but it’s a nice time to speak with my wife and three boys.”

Graham is currently casting an eye over the markets, which have been affected by the outbreak of the coronavirus. In the short term, he sees that markets look fairly fully valued, but he says it is hard to see that central bankers will reduce the liquidity that has been supporting markets in 2019. “Market sentiment has however been pretty positive and that always makes them a little vulnerable to unknown events,” he says. “The recent hit to sentiment from the coronavirus is a good example.”

But Graham primarily remains firmly focused on his mission of First State being a leader in responsible ownership, advice and retirement outcomes. “When we’re creating really strong outcomes for our members in those three areas, I’ll feel we’re achieving strongly. We have got a little bit of time before we get there, but I know our members will be better off when we do.”