Turning the spotlight on currency risk

Superannuation funds are increasingly paying attention to currency risk as they boost their allocations to offshore assets, explains DREW BRADFORD.

It is no secret that Australian superannuation funds have been increasing their offshore asset allocation in recent years, and research shows that trend is set to continue as funds seek diversification and attractive returns.

NAB’s 9th Biennial Superannuation FX Hedging Survey found that superannuation funds had on average 41 per cent of their assets offshore as at June 2019, and 72 per cent of funds plan to boost their allocation over the next two years. This was particularly strong among the larger funds (more than $25 billion of funds under management), with 85 per cent of this group signaling they will likely increase their offshore exposure.

Superannuation funds also signaled a strong bias to increase their relative allocation to unlisted markets such as private debt, infrastructure and real estate.

The survey of 61 funds, covering A$1.82 trillion of assets under management, also found that as funds increasingly boost their exposure to offshore assets, they are running a higher level of foreign currency exposure – largely by reducing their hedge ratios on their international equity exposure.

Interviews with survey participants showed many funds are preferring to take a more dynamic approach to their hedging strategy, allowing a more responsive approach to market conditions – such as a perceived large undervaluation or overvaluation of the Australian dollar.

Given the historically high negative correlation between the Australian dollar and risk sentiment, it isn’t surprising that many funds have been running a higher level of FX exposure. From a risk management perspective, this is seen as a cost-effective way to help protect investment portfolios against any significant deterioration in risk sentiment.

Despite new record highs for the S&P 500 and continued accommodative monetary policy settings from central banks around the world, investors remain cautious towards the investment outlook due to a variety of macroeconomic and geopolitical concerns. These include a softening global growth outlook, uncertainty over Brexit and the ongoing trade dispute between the US and China. Funds with a high weighting to growth assets in particular are typically running a higher foreign currency exposure as a means to reduce their exposure to a potential souring of risk sentiment.

The NAB FX survey revealed a notable shift towards funds considering currency in terms of target FX exposure rather than the traditional hedge ratio. We believe this change is driven by a desire of funds to view currency through the same lens as they view other asset allocation decisions, asking: what percentage exposure do I want to equities, bonds, property, infrastructure, etc?

More than half (57 per cent) of funds surveyed consider currency now in terms of a desired FX exposure, highlighting a growing awareness that currency risk decisions can be very influential in determining future investment returns. Consistent with this, all respondents in the survey said currency decisions were either ‘important’ (83 per cent of funds) or ‘marginally important’ (17 per cent).

Emerging markets usually hedged to a developed market proxy, if at all

Despite increasing allocations to emerging markets in recent years, the survey highlighted there is no unanimous approach to hedging this exposure. A majority (58 per cent) of funds do not hedge their emerging market exposure, and this includes 67 per cent of large funds.

Funds may have a number of reasons for not hedging their emerging market exposure, including the long-term diversification benefits of being unhedged; the fact many emerging market currencies can be illiquid and costly to hedge; and the potential margining and collateral required if non-deliverable forwards are part of the fund’s hedging process.

Of those funds that indicated an element of hedging, 82 per cent are using developed market proxies, while only 18 per cent hedge to the underlying asset exposure, which is typically the MSCI All Country World Index (ACWI) for equity exposure. Surprisingly, just 7 per cent of funds are fully hedging their emerging market exposure.

While using developed market proxies may be viewed as a cost effective and simpler way to hedge, recent experience has shown this method can also introduce unwanted tracking error for investors. In the case of superannuation funds using a developed market basket of 5-6 currencies, the deviation in the last 12 months versus the MSCI ACWI has been approximately 80 basis points.

A simplistic way of illustrating this tracking error is to chart the US dollar against a basket of global emerging market currencies (for example JP Morgan’s EMCI). As seen below, the EMCI has risen by some 16 per cent since the Trump administration first started applying tariffs on a broad swathe of Chinese imports in early 2018, to which one response from China has been to depreciate its currency, dragging down a broader emerging market currency universe (Chart 1). During this same time, the US dollar against a basket of developed market currencies (such as DXY) has risen by only 8.4 per cent. 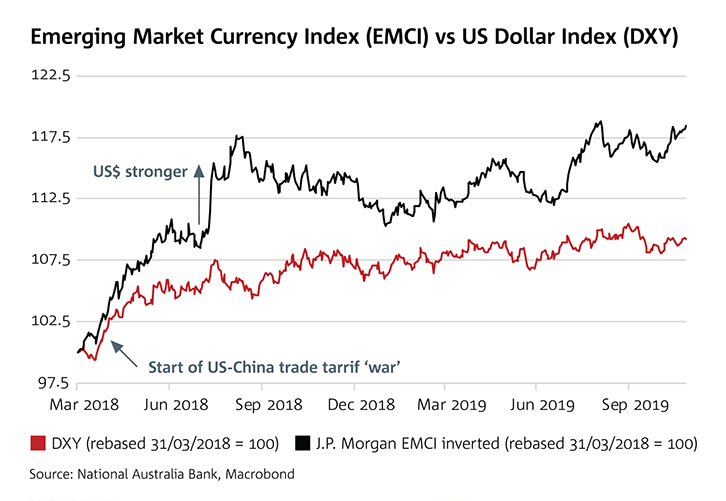 With the increasing internationalisation of investment portfolios and expectation Australia’s superannuation assets will soon surpass $3.0 trillion, currency decisions will only grow in importance. As the BIS Triennial survey released in September highlighted, global turnover in currency markets continues to be dominated by four or five currencies, meaning investments in other markets face ongoing potential challenges in terms of liquidity and currency restrictions.

In this environment, funds are evolving their approach to currency risk management. While insourcing currency management may not be a priority, funds are generally reviewing currency risk more frequently. In the case of medium and larger sized funds, internal teams are also playing a greater role influencing currency decisions, often in conjunction with their asset consultant.

Currency management costs are also facing great scrutiny, with 78 per cent of respondents to the NAB survey saying they are considering or have already decided to implement some form of Transaction Cost Analysis.

Consistent with the evolving decision-making process for currency management, many funds are also looking at the characteristics of key currency exposures and whether it makes sense to hedge these. The volatility of the currency versus the underlying asset can be an important determinant as to whether a fund will hedge or not hedge.

For instance, historically, safe-haven currencies such as the Japanese yen and the Swiss franc can see significant capital inflows at times when global market sentiment becomes more risk averse. This can dramatically impact the value of investments in these markets in Australian dollar terms.

There’s no one size fits all hedge strategy, but it’s important to have a clear framework in place

The degree to which funds see the need to hedge is influenced by many factors and mix of assets in the portfolio. This includes the risk-return profile of the investment portfolio, the mix of currency exposures and associated transaction costs, and the level of liquidity available in the fund.

What is important for all funds is to have a rigorous currency framework in place that gives them the ability to act in an opportunistic manner when under or overvaluation of the currency occurs. Typically, this would be part of the fund’s dynamic asset allocation (DAA) rather than strategic asset allocation (SAA). DAA provides a framework for investors to allocate capital and make decisions based on factors such as currency forecasts and momentum.

Utilising a medium-term fundamental valuation framework, such as the one developed by NAB’s FX Research team, can help identify periods of significant undervaluation or overvaluation in the AUD/USD, which may produce opportunities to shift FX hedges. This can be a valuable tool to support investment teams with currency decisions.

Investment teams and their currency managers are continuing to invest more time simulating the characteristics of currency returns, volatiles and correlations under different proxy assumptions to identify the optimal risk adjusted returns and costs.

Without a clear framework in place, the ability to act opportunistically can quickly be lost. ;We saw an example of this during the last Christmas – New Year period when, following the 3 January Australian dollar ‘flash crash’, an opportunity existed once liquidity had returned to the market to buy Australian dollars at much more advantageous—and “fairly valued”—levels than had prevailed for much of December. Some funds could quickly adjust their hedging, while others couldn’t act because they didn’t have the right approvals in place and/or key decision makers were out of office.

We are pleased to see the 2019 NAB FX superannuation survey highlighting an increased acknowledgement by funds that currency decision can meaningfully impact investment returns. As currencies move in cycles, it is also encouraging to see funds being more dynamic, flexible and responsive to the evolving investment environment.

As funds continue to expand their offshore exposure and move into new and potentially unfamiliar markets, challenges around hedging are becoming even more important to resolve. With funds continually seeking further diversification and yield in the current low-rate environment, it will be no surprise that as international exposure increases, managing FX exposure will become even more important.