Newly at the helm, CEO Renato Mota is optimistically steering IOOF, clearing the challenges and keeping new opportunities in his sights. By BEN POWER.

Renato Mota, IOOF CEO, attributes many of his beliefs and discipline around money to his upbringing.

Mota’s parents moved from Portugal to Australia in the early 1970s settling in Victoria’s Latrobe Valley. His father worked as a rigger in construction; his mother in a factory.

Through hard work and disciplined saving, they retired comfortably and own their house outright, as well as a couple of investment properties.

In June, IOOF made Mota its permanent CEO following a troubling period for the wealth management business after it was slammed at the Royal Commission and saw APRA impose conditions on its superannuation business.

If Mota is to turn IOOF around he will have to invoke his parents and their ability to reinvent themselves through hard work and integrity; but to also remain optimistic about the opportunities that challenges provide.

“Out of all this uncertainty and volatility I think are emerging unbelievable opportunities – a once in a generation opportunity for our sector,” he says. “At IOOF we have an opportunity to create Australia’s leading advice-led wealth management business.”

“But our success in achieving that will rely on us rebuilding our organisation as a trusted organisation and that’s our primary focus right now.”

At school, Mota was torn between two career paths.

The Latrobe Valley had attracted Mota’s parents because of the construction work around the area’s power stations. In that construction-heavy environment, Mota initially eyed a career in engineering. Plus, he was good at maths and science.

“But I developed an interest in international affairs, particularly economics, at high school,” he says.

He realised that finance gave him a broader landscape, with global opportunities. Finance won out. “There was an opportunity to really make a difference at a macro level, but still leveraging core skills that I really enjoyed like economics and maths,” he says. He undertook an Honours degrees in Commerce at Melbourne University.

His first role was in M&A at the National Australia Bank, which he describes as an exceptional training ground and provided his first introduction to the wealth management industry.

One of his first deals was NAB’s $4.5 billion acquisition of MLC in 2000. “We got thrown in the deep end as young analysts in an M&A context.”

Mota says he developed a love of wealth management, its dynamism—it was a time of massive disruption with banks acquiring wealth managers—and its impact on everyday Australians.

He gained additional exposure to wealth management in his next job as manager of corporate advisory at investment bank, Rothschild, where he worked on the demerger of Pearl and Henderson from AMP. 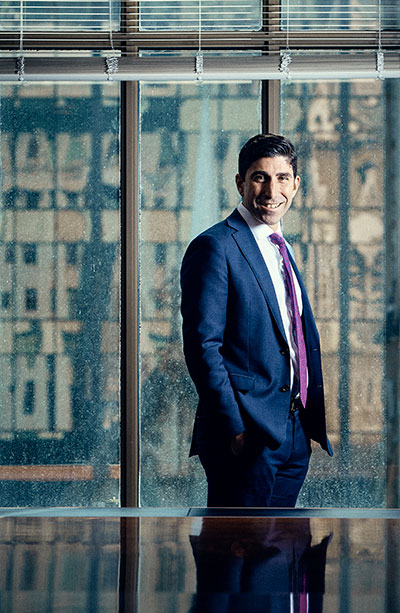 During this time, Mota focused on developing organic growth drivers, primarily through client relationships. In more recent years, he was instrumental in developing IOOF’s advice-led strategy and purpose-driven culture.

In December 2018 he was appointed acting CEO, replacing Chris Kelaher.

Earlier that month, after allegations emerged at the banking Royal Commission, APRA had launched legal action against IOOF. APRA sought to ban five senior IOOF executives from running a superannuation fund and imposed license conditions on the company.

Mota was confirmed as permanent CEO on June 25, charged with resetting the company.

Mota says he uniquely combines a deep understanding of IOOF’s benevolent history and service culture with a strategic background that means he will challenge the status quo and be a change agent.

The Royal Commission was a “wake-up call”, Mota says.

“Keep legalities aside, the reality is it’s a wake-up call to the industry to realise the way we have behaved and what we delivered to the community is not in line with what they expect,” he says. “We’ve got an opportunity now to hold ourselves to higher standards and make ourselves more relevant to the communities we serve.”

Mota believes the Royal Commission will prove to be a real inflection point for the industry. “It’s a point in time we will look back on as completely redrawing the opportunity for wealth management to deliver value to the community.”

Despite its challenges, Mota has faith in IOOF’s core business and mission. He says that while IOOF has changed a lot in the last 15 years and gone through a lot of mergers, its core purpose hasn’t changed. “That remains that same – that is to help our clients and members. For me that’s a real highlight and asset of the business.”

Mota’s immediate focus over the next twelve months is to stabilise IOOF.

Most of his time is being taken up by ensuring its governance capability—risk, compliance and legal—is ‘fit for purpose’.

But he is also focused on conduct culture. “There are some aspects of our culture that we’re very proud of; other aspects we need to develop and reinforce more visibility and more clearly,” he says.

“There are some aspects of our culture that we’re very proud of; other aspects we need to develop and reinforce more visibility and more clearly,”

A key priority, he adds, is making sure IOOF develops culture in a very disciplined and deliberate way and not through osmosis.

But stabilising the organisation doesn’t mean standing still. “It also means reinforcing and accelerating some of the change elements we were already doing,” he says.

Over the past four years, Mota has been implementing an advice-led strategy and recalibrated the organisation to become purpose led with a mindset.

If IOOF can get the stabilisation phase right, Mota says there will be tremendous opportunities in the next two to three years to help transform the industry and the company itself.

“We’re jumping at that chance, we’re going to take it as a catalyst for change. It doesn’t mean we throw out everything we have done. I think there are some really admirable and honourable aspects of what we do and even in the IOOF context of our culture.”

He wants IOOF to clearly connect with clients through simpler products, aligning with outcomes and connecting more with communities.

IOOF has been pursuing an advice-led strategy, however Mota says the last three to four years have shown that the model where advice was subsidised by product was clearly inappropriate.

“There is an opportunity to reinvent the advice model in a way where it can stand on its own two feet, and it can be rewarded for the value that advice alone generates and be completely separate from product.” Mota says that will require IOOF to focus on the ‘coaching’ nature of advice, while being supported by ‘industrialised’ systems and processes.

“There is an opportunity to reinvent the advice model in a way where it can stand on its own two feet, and it can be rewarded for the value that advice alone generates and be completely separate from product.”

In Superannuation, Mota says there is an opportunity to create a more mature and sophisticated way to think about member outcomes and what member outcomes mean. That includes using technology and data to better measure what matters to members. “The measures the industry uses aren’t necessarily that meaningful when we translate them down into individual member outcomes,” he says.

Mota says that IOOF is also using APRA’s license conditions as an opportunity to embed better practices and to gain a competitive advantage.

“By making sure we’re thinking through these things in a really mature way rather than seeing it as an exercise in meeting an objective and then forgetting about it, the conditions are an opportunity to build a more mature environment through which we deliver outcomes to members,” he says.

“There is a tremendous opportunity ahead of us, but in the short term we need to make sure the foundations of the organisation are fit for purpose,” he adds.

The fallout from the Royal Commission threatened IOOF’s $1 billion acquisition of ANZ’s pensions and investments business OnePath, which has faced several delays. Mota says IOOF remains committed to the OnePath acquisition, while acknowledging the current level of uncertainty. IOOF will consider further acquisitions after OnePath if they are consistent with the company’s strategic direction.

When looking at the broader industry, Mota says he hopes the current member-outcomes focus creates an industry conversation around how to create better retirement outcomes for members.

He says there has been an overemphasis on investment management to deliver retirement outcomes. Other factors, he says—such as salary sacrificing, good budgeting and prudent management of affairs—also have a material impact on outcomes.

“Our industry is focused on cost and performance. Both are very important drivers and factors, but there are other means and other ways. I feel the industry can add more value to people’s retirement incomes, both financial and psychological.

“At the end of the day we want people to have confidence about their future and financial future. There is an opportunity to do more in psychology and the broader well-being associated with leading into retirement.” 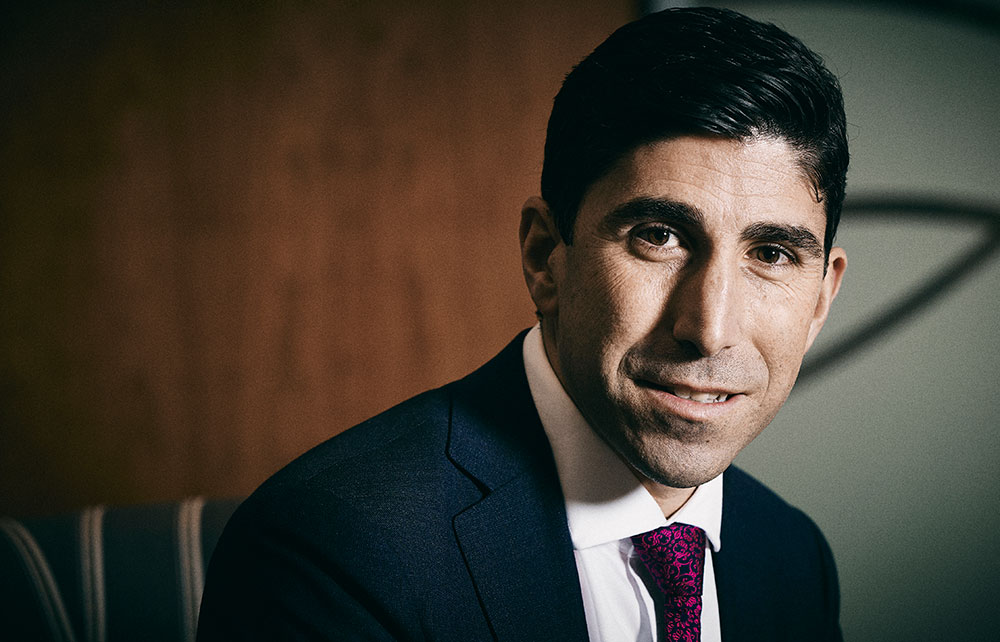 Inspired by his parents, Mota says that Australians can rediscover the power of saving, something that has been lost. “Back in the 60s and 70s the access to credit wasn’t there. There was a real necessity to save. Saving was a higher priority than it is today.

“Even in superannuation, saving is still a skill that is critically important today, albeit emphasised less than we have or should,” he says. “We have become a culture that’s become quite consumption-centric with a heavy reliance on credit. Whether that’s in the property market or in our own personal lives.

“Some of those skills that were more evident probably a generation or two before us, are things as an industry we can reflect on and help people with. They may be very basic skills but very valuable skills.”

Despite the massive challenge in his new role, Mota says his top priority is family. He is married with two daughters. He remains an avid soccer fan—despite his own soccer career being “tragically cut short by a lack of talent” he jokes—and is a dedicated Socceroos and Melbourne Victory supporter.

Mota’s parents would no doubt be proud of their son’s achievements, but Mota himself says that isn’t their focus.

“We don’t talk about it much,” he says. “What they are really proud of, as migrants coming to Australia without any formal training, is they put all kids through uni.” (Mota’s brother is an accountant; his sister a school teacher.”

“They are proud of the environment they were able to create for us as a family. All three of their children have well-established and happy families. That’s what they should be proud of.”

But they can also be proud of their hard work and discipline that has allowed them to enjoy a comfortable retirement. Amid the challenges and disruption facing the industry and his company, that is something that Mota wants other Australians to enjoy, and IOOF to help deliver.